In the world of gaming, being able to back your claims of world domination with screen shots and video captures is key. One of the tools gamers use to capture high-quality AVI videos (with sound) is Fraps. 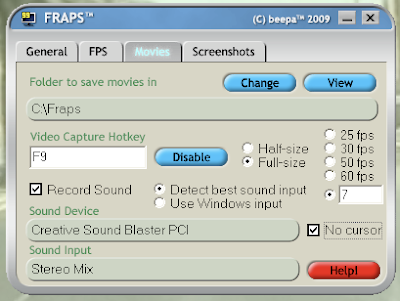 According to the creators, Fraps can "capture audio and video up to 2560x1600 with custom frame rates from 10 to 100 frames per second." Additionally, it's screen capture feature automatically names and time stamps the captured screens.
Fraps 2.9.8 supports Vista and DirectX 10.
"Vista also includes a rewritten audio subsystem. Fraps can take advantage of this and directly record a sound stream from the machine without requiring any support from the soundcard driver. This allows you to capture ingame audio even if you are using a USB headset or other audio device which does not normally support a "Stereo Mix" or "What U Hear" recording input.

Since the Vista Desktop Window Manager (DWM) runs through DirectX we have also added a new option to monitor the desktop under Vista. You can now take screenshots and record video from the desktop just like any other game or 3D application."
Give it a try with your proprietary CCTV playback applications. I think that you'll be pleasantly surprised at the quality it achieves for the price. The full version costs $37. There's a demo version that is free, but it puts a watermark over the resulting files.
Enjoy.
Posted by Jim Hoerricks at 4:31 AM