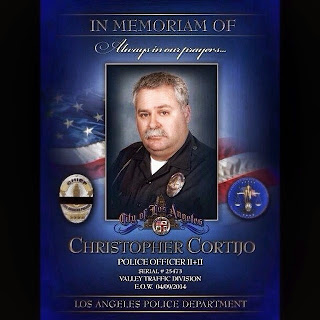 Los Angeles, April 9, 2014 - On behalf of all members of the Los Angeles Police Protective League (LAPPL), President Tyler Izen responded to the tragic news that the Los Angeles police motorcycle officer who was struck by a DUI driver in Sun Valley on Saturday has passed away. The accident occurred at the intersection of Saticoy Street and Lankershim Boulevard around 5:34 p.m. Motor Officer Christopher Cortijo was stopped a traffic light when he was struck from behind by a red Chevrolet Blazer traveling at a high rate of speed. The officer ended up pinned between two vehicles.

“Our hearts are broken,” Izen said. “The LAPPL is saddened to learn of the tragic death of Officer Christopher Cortijo who was killed upholding the oath he swore: To protect his community. We extend our deepest condolences to the Cortijo family, friends and coworkers. Officer Cortijo paid the ultimate sacrifice in service to his community. We ask that the community please keep Officer Cortijo and his family in their prayers, and remember the sacrifices paid by law enforcement officers to keep our communities safe.
Posted by Jim Hoerricks at 5:30 PM