Moving beyond the built-in functionality of Photoshop, let's look at some helpful tools that are commercially available. We'll start with Nik Color Efex Pro 2.0.
There is so much to this comprehensive plug-in package. Today, we are going to look at 2 particular filters found within the Complete Edition to help us with Rob's fishing trip picture; White Neutralizer and Remove Color Casts.
White Neutralizer 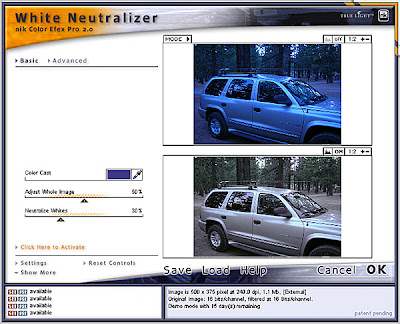 I tried to start with the seemingly obvious choice of Remove Color Cast, but the cast was too strong for the filter and did not produce an easy result. Select Filter>Nik Color Efex Pro 2.0:traditional filters>White Neutralizer. With the White Neutralizer filter dialog box open, I chose the Color Cast with the eyedropper. The Adjust Whole Image slider controls the amount of the colour cast that is removed from the entire image. The Neutralize Whites slider controls the removal amount from within the light areas in the image, allowing crisp, clean highlights. This did a good job of removing the cast from the whole image. There was a little cast remaining, so I moved on to use the Remove Color Cast filter.
Remove Color Cast 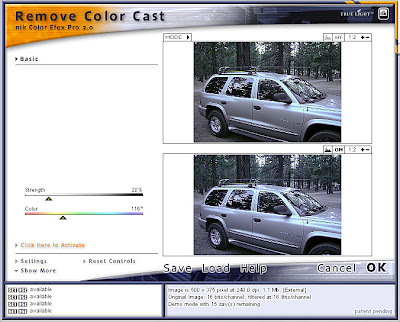 Select Filter>Nik Color Efex Pro 2.0:traditional filters>Remove Color Cast.With the Remove Color Cast filter, I was just going for a subtle change. There are only two sliders to deal with in this dialog box. The Strength slider controls the amount of the color cast that is being removed by the filter. The Color slider indicates the color of the color cast that is being removed. I removed the residual cast and moved on to address sharpening and a final black/white touch-up.
The final look achieved with the Nik Color Efex Pro 2.0 filters 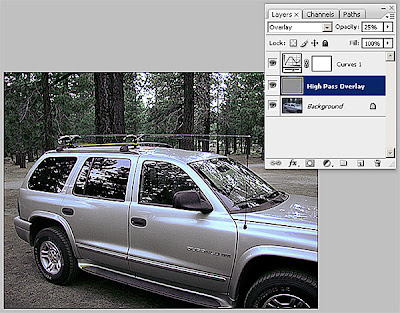 Overall, I am satisfied with the results as well as how quick and easy it was to get from start to finish. The Complete Edition is priced at US$299.95. If you have to quickly correct a bunch of images from the same source, this package will more than pay for itself. Additionally, there is a new version on the horizon and Nik Software is offering a free upgrade to folks who purchase 2.0 before the new version is released. For those who attended my class in Calgary, a 15 day fully functioning demo version is included in your materials. For everyone else, you can find the demo here.
On the forensic side, there are a few hiccups. While it supports 16bpc mode, it doesn't work as an adjustment layer or as a smart filter. Therefore, the corrections done with these filters are destructive to the layer on which they are applied and can't be adjusted later. As long as the images that are adjusted using these filters are not going to be debated over, and depending on the applicable case law, you should be OK using these in your work flow (internal PowerPoint presentations, and etc). As with everything that we do, check for yourself. These issues may be remedied in the next version, so stay tuned.
Posted by Jim Hoerricks, PhD at 10:37 AM