The recent announcement that the Scientific Working Group on Imaging Technology (SWGIT) made the executive decision to cease operations was disappointing news to the members of the Scientific Working Group on Digital Evidence (SWGDE). In this exciting but challenging time of standardization efforts and quality assurance development, our sister SWG was a solid example of how people can contribute to an industry effort in addition to their normal work responsibilities. The SWGIT membership leaves an impressive legacy of numerous guidelines and best practices in the Forensic Video, Image Analysis, and Forensic Photography disciplines.

SWGDE was proud to work closely with SWGIT for many years. Together we produced several joint documents including the SWGDE/SWGIT Guidelines and Recommendations for Training, SWGDE/SWGIT Proficiency Test Program Guidelines, SWGDE/SWGIT Recommended Guidelines for Developing SOPs, and the SWGDE/SWGIT Digital & Multimedia Evidence Glossary. SWGDE is pleased to have had the opportunity to support SWGIT when we could, especially with joint meetings. SWGDE helped build and financially support the SWGIT website since its inception and will continue to do so.

In keeping with that tradition of cooperation and support, SWGDE will help continue the achievements of SWGIT's membership by inviting them to participate in three new standing committees created to address video, photography, and image forensics. We also invited them to bring any unfinished work items, topics and agenda items that need addressing, but it will ultimately be up to the new committee members to decide their agenda and priorities.

SWGDE's mission is to bring together organizations actively engaged in the field of digital and multimedia evidence in order to foster communication and cooperation as well as to ensure quality and consistency within the forensic community. So while it is difficult to see such a valuable member of our community dissolve, we hope that through our new committees, SWGDE will address the discipline specific needs formerly provided by SWGIT. 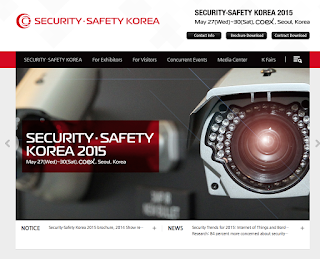 South Korea's big security convention is next week. Security - Safety Korea 2015 is sure to feature the latest and greatest of Korean CCTV tech. This means that you can expect the usual flood of new Korean DVRs at retail outlets. It also means new codecs, new players, and (hopefully) some DVRs that will feature faster I/O options. Nothing's worse than an HD recorder with USB 1 output.
Posted by Jim Hoerricks, PhD at 2:00 AM No comments:

Taser recently made an incredibly smart move, they acquired MediaSolv. This solves a serious issue for them and gives their customers an option of either cloud storage (Evidence.com) or local evidence management (MediaSolv Commander).

Here's the announcement.
Posted by Jim Hoerricks, PhD at 2:00 AM No comments:

Many of us are in the business of collecting data from crime scenes. Some actually collect hard drives. This article from PCWorld highlights a new risk associated with unpowered SSD drives.

"A new research presentation shows that solid state drives can lose data over time if they aren’t powered on, especially in warmer environments. A powered-off drive in 104 degrees Fahrenheit may start seeing data loss after a couple of weeks.

The information comes from Seagate’s Alvin Cox, who as part of a presentation to the Joint Electron Device Engineering Council (JEDEC). Though the presentation is a couple months old, it was recently picked up by ZDNet, Slashdot and other sites.

Cox’s presentation shows basic performance requirements for both consumer and enterprise SSDs. It notes that consumer SSDs, when powered-off in 86 degrees Fahrenheit (30 degrees Celcius), should retain data for about a year. Bumping up the temperature by 9 degrees Fahrenheit (5 degrees Celcius) reduces the time of data retention by half. Store your SSD in 131 degree heat, and it might start losing data after a couple of days ..."

Click here for the whole story.
Posted by Jim Hoerricks, PhD at 5:00 AM No comments:

This just in from SWGIT:

The Scientific Working Group on Imaging Technology (SWGIT) would like to thank the forensic community for the continued support, involvement, and participation in making this group and the documents we have provided over the last 18 years so very successful. The mission of the SWGIT has been to facilitate the integration of imaging technologies and systems within the criminal justice system (CJS) by providing best practices and guidelines for the capture, storage, processing, analysis, transmission, output, and archival of digital evidence. This mission has served our community well since the inception of the group in 1997. The SWGIT documents have been essential to developing laboratory and law enforcement best practices and guidelines across the United States as well as internationally. The documents have been used to demonstrate reliable scientific principles and methods in court and Daubert hearings.

The current economic climate has impacted the continued work of SWGIT. Due to a lack of funding revenue, SWGIT has made the decision to terminate operations. SWGIT’s website and social media will remain available as a continued valuable resource for all questions involving Forensic Video, Image Analysis, and Forensic Photography.
SWGIT documents will remain in effect and available on the SWGIT website, www.swgit.org. SWGIT has addressed concerns important to all members of the community including first responders, laboratory examiners, and managers of criminal justice organizations. Our website contains more than 20 recommendations and guidelines detailing procedures for digital photography, video and image processing, CCTV installations, documentation of image enhancement, and several other topics important in the current forensic environment. SWGIT was instrumental in the publication of two of our documents as ASTM standards, “Standard Guide for Image Processing” and “Standard Terminology for Digital and Multimedia Evidence Examination.”

As the forensic community moves forward, a goal of SWGIT is to continue to engage the entire law enforcement imaging community in the development of guidelines, best practices, and standards. In remaining true to that goal, SWGIT strongly encourages the members of our forensic disciplines to continue to support other professional groups that strive to provide such information.

SWGIT will continue to have an active web presence at www.swgit.org and on social media. Please see the social media links provided on our website.

Thank you again for making SWGIT such a long-standing success.

How Are States Going to Pay for Those Police Body Cameras?

This just in from Governing.com: "The Police Executive Research Forum survey found most agencies spent between $800 and $1,200 per camera to purchase them, a daunting price tag for departments already strapped for cash.

But it is the ongoing costs that are the real challenge. The New Orleans Police Department plans to purchase 350 body cameras, but is budgeting $1.2 million over five years, mostly for data storage. Other departments, the police forum found, expect to spend $2 million for a few years of data storage.

In Iowa, the Des Moines Police Department is looking for $300,000 just to start a body camera program. Duluth, Minnesota’s initial $5,000 purchase of 84 cameras ballooned to about $78,000 for licensing and data storage. Last year, Duluth’s police budget was $19.1 million, while Des Moines spent more than $59 million on its police force.

Many states are debating the issues that surround police cameras without tackling the funding question, said Richard Williams, a criminal justice policy specialist with the NCSL. In many instances, he said, lawmakers are focused how long departments should have to keep video, and if or when recordings should be made public.

Miller, with the Police Executive Research Forum, said those issues are important, but that for police departments, cost is the overriding concern.

Officers could potentially record millions of videos a year, any number of which could be used as part of a criminal proceeding, a public records request or for another official purpose. The cost of downloading, logging, handling and storing all that video can be staggering.

“Most of the agencies that we worked with say the biggest issue is the backend data storage,” she said. “It can cost hundreds of thousands of dollars to store video each year.”

Costs were a stumbling block in Utah this year, where state lawmakers debated but didn’t pass body camera legislation. Meanwhile, some departments around the state are using the technology — and trying to meet the costs associated with it.

In Clearfield, Utah, a city of about 30,000 located 30 miles north of Salt Lake City, the police department has been using body cameras since 2010. But recently, data storage problems came to a head, and for a few weeks, the department was forced to use DVDs to store video because it ran out of computer server space.

“The more you use them, the more storage it takes, and the costs increase,” said Mike Stenquist, an assistant chief. “The public wants more, it also costs more. It creates a lot of problems.”

It’s not likely to get any better either, Stenquist said. Years ago, the department used older model cameras that needed to be recharged frequently and could only record two hours of video at a time, meaning officers had to return to the office frequently to download any recordings.

New models last longer and have greater storage capacity, he said. But now there’s another problem: The newer cameras record high-definition video, which means the video files are much larger, a reality that contributed to the department’s recent data crunch.

“The data just builds up,” Stenquist said. “Now that we have better cameras that record through a whole shift, it’s taking three or four times the data storage.”

Between cost concerns and public access questions, Stenquist said, it’s probably inevitable that state lawmakers will have to step in.

“It’s just become pretty muddy about what’s going to happen in the future,” he said. “There’s a lot of work to be done.”

Click here to read the whole story.
Posted by Jim Hoerricks, PhD at 3:00 AM No comments: