Supreme Court of Canada halts use of expert opinions

Here's an amazing story from the Globe and Mail.

"… He said that Canadian courts had in effect been “contracting out” questions of guilt or innocence to experts. From here on, though, “any time ‘experiential’ evidence points the finger directly at the accused, that’s going to be offside. It’s not just drug cases – it’s any serious case …"

"… Ben Berger, a criminal-law specialist at Osgoode Hall Law School in Toronto, said the ruling is an attempt by the court to rein in expert witnesses, part of a trend since Ontario’s 2008 Goudge inquiry into more than a dozen wrongful convictions in baby deaths, stemming from the testimony of disgraced Toronto pathologist Charles Smith.

The Supreme Court found that “police experience on its own is something that has to be looked at with suspicion and a critical eye,” Prof. Berger said. “That’s important not just in a drug setting but in pretty much any criminal investigatory setting ...”
Posted by Jim Hoerricks, PhD at 10:30 PM No comments:

Western Digital recently announced it's new line of hard drives built specifically for the surveillance (dCCTV) market. The new WD Purple HDD is available now in 1TB, 2TB, 3TB and 4TB capacities that are slated to cost $90, $120, $160, and $200, respectively. That's a lot of video to manage. Given the long budgeting cycle for government agencies, you better start planning on increasing your storage capacity soon.
Posted by Jim Hoerricks, PhD at 3:30 AM No comments:

Sony's Audio Master Suite for Mac is on sale this week

I've been using Sound Forge since it was a Sonic Foundry product. It's great for quick edits and for dealing with difficult file types. It's now available for OSX in the Audio Master Suite. The suite contains Sound Forge Pro Mac 2, SpectraLayers Pro 2, Convrt™ Batch Processing Automation Tool, Mastering and Repair Suite powered by iZotope®, and a few other goodies for only $499. This week, they've taken $100 off the price.

This is an awesome opportunity for those who are using Macs, but love Sony's audio products.
Posted by Jim Hoerricks, PhD at 4:00 AM No comments:

Amped FIVE update: load subtitles and a lot of other improvements

Sometimes DVR systems save timestamp information in a separate subtitle file. With this new filter you can finally view the exact timestamp printed on the video, if they are encoded as smi or srt files. The timestamp appearance can be fully customized by the user: location on the picture, size, font, style and color are fully configurable. Load Subtitles is located in the group Presentation.

Quick information on the current file

This is something very simple, but that will certainly make your life easier. Basically we added in the status bar the name of the current file and the pixel resolution of the currently displayed image, so you can always know what you are working on. 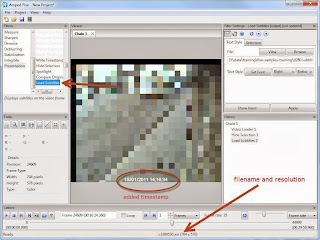 Posted by Jim Hoerricks, PhD at 5:00 AM No comments: 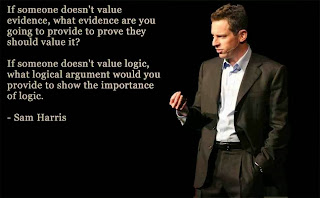 Posted by Jim Hoerricks, PhD at 9:00 PM No comments:

I received an invitation to take a survey being run by Project S-Five. It's an EU based study, not to be confused with Amped Software's FIVE. Here's what the project is about.

Throughout the last decade, the digital video and surveillance industry has developed and expanded at an ever increasing pace. Unfortunately, the images and video recordings that are most often provided to forensic investigators are composed of rather low quality image data. Analysing such data requires considerable knowledge and tuning of different parameters in various software tools. As a consequence, forensic laboratories are most often overloaded with image and video analysis casework, and have experienced considerable difficulty in keeping up with recent developments both in terms of (academic and commercial) R&D and available software tools. Additionally, from an organizational point of view, an overview of the methods and procedures that are currently being used across the ENFSI member institutes is lacking. This hinders a unified methodology of dealing with this type of evidence and the development of standardization and quality assurance issues in general. Finally, there exists an urgent need for reference input material that can be used for evaluation and training of (new) investigators, for testing and validation of existing and new software tools, etc.

This project will study various issues related to the Standardisation of Forensic Image and Video Enhancement (S-FIVE). The main focus of the project is oriented towards techniques that are used for improving the quality of surveillance video data and other types of images that portray persons and objects at the macroscopic level.
The S-FIVE project is a project funded by the European Commission through the European Network of Forensic Science Institutes (ENFSI) Monopoly 2011 programme "Improving Forensic Methodologies across Europe"(IFMAE).

As I'm filling out the survey, I could't help but remember the mantra from working with the SAPS in Pretoria - easy things should be easy. When the survey asked about difficulty, there wasn't a single question that I couldn't answer as "easy." For enhancement and analysis tasks, I use Amped's FIVE. Easy/simple things should be easy, and fast.

Here's the link to the survey: https://www.s-five.eu/limesurvey_9/index.php?sid=5
Posted by Jim Hoerricks, PhD at 5:30 AM No comments:

The NIST forensics science team is holding a public presentation and live webcast on its new Organization of Scientific Area Committees (OSAC) at the American Academy of Forensic Sciences annual meeting in Seattle, Feb. 18, 2014, 5:00 to 7:00 p.m. PST.

The establishment of OSAC is a result of a NIST and Department of Justice memorandum of understanding signed last year with the aim of improving standards and practices in forensic science laboratories.

NIST envisions uniform administration of development, promulgation and adoption of standards through the OSAC as well as supporting communication flow between the scientific area committees and the forensic science community. The intent is to bring structure, scientific rigor and increased communication among forensic scientists, research scientists, academicians, statisticians, attorneys, managers and quality assurance specialists.

Important notes about Live Webcast:
This webcast will be streamed from Mediasite by sonicfoundry, individuals logging in from personal computers/laptops may need to:
Install Microsoft Silverlight prior to logging on – this is needed in order to view the program.
If any participants use Safari on Mavericks, they will need to disable plugins power saver option. That should be turned off so that it does not prevent the media player from loading.
Posted by Jim Hoerricks, PhD at 11:30 PM No comments:

What should a 101 level course contain?

Early last year, I wrote about Image Analysis Domains. I noted: "In terms of the domains of analysis, there are four agreed upon domains for forensic video/image analysis:

In the American university system, a 101 level course is generally an introductory educational course. Thus, if you are taking a course entitled Image Analysis 101, it should contain a solid introduction to the domains of image analysis. As video can be considered a series of images, Video Analysis 101 should also contain these domains.

I find myself writing this in my hotel room in Tshwane, Gauteng, South Africa. South Africa's Magistrate Courts have no jury to sway our story telling. The story telling aspect of forensics is irrelevant here. The work here is almost pure image/video analysis in that the work has to stand on its own. The analyst may be called upon by the court to explain a few technical things, but largely the evidence is simply submitted for inclusion in the trial. You don't see the type of long, drawn out testimony by experts that we see in the US. To me, that's refreshing.

The domains of image/video analysis are sciences in and of themselves. As students of the craft of analysis, it's up to us to assure that we're educated and proficient in what they are and not what some vendors would like them to be. Photogrammetry, as an example, obeys certain agreed upon rules. If you are working in photogrammetry, you should understand the science behind the tools that you are using. The same is true for all of the domains.

So what does this all mean? Where am I going with this?


None of these should be exclusive to a certain toolset or manufacturer. They should equip the analyst with the knowledge of the science behind the techniques and the tools. Not just an explanation of a given tool's options for JPEG DCT examination in authentication of an image, but a deeper look at the way JPEG files work, how they are created, their history, and etc. In this way, the DCT examination will make more sense, and the American/Canadian analyst will have an easier time explaining his/her work.

If you take this approach, you may end up where I am - dissatisfied with your old tools. Try enquiring about the science behind the tools offered by the big three (Adobe, Avid, Sony). You won't get a straight answer. Their answers are trade secrets. You'll find yourself investigating the more purpose built offerings from Amped Software, Cognitech, MotionDSP, Noritsu, Salient Sciences, and Signal Scape. From there, you'll want to know which company offers both qualitative and quantitative tools. This will narrow the list significantly. You'll ask about cost, training, and general acceptance. If you want to do actual quantitative  image / video analysis, there are only a few manufacturers in this space - and they aren't the big three.

To pull all of this together, a course on FIVA 101 should be an introductory course on concepts of image and video analysis in a legal setting. It should introduce the domains and their role in the legal process. This is an entirely different course than an introduction to image/video processing with a specific tool or manufacturer. The former is considered education, the latter is considered training. Both are important. But, they are entirely different. When spending your precious funds to upgrade your knowledge, be sure to ask specific questions. Do you want training on a set of tools, or do you want education on the domains of analysis - or both.
Posted by Jim Hoerricks, PhD at 10:45 PM No comments: 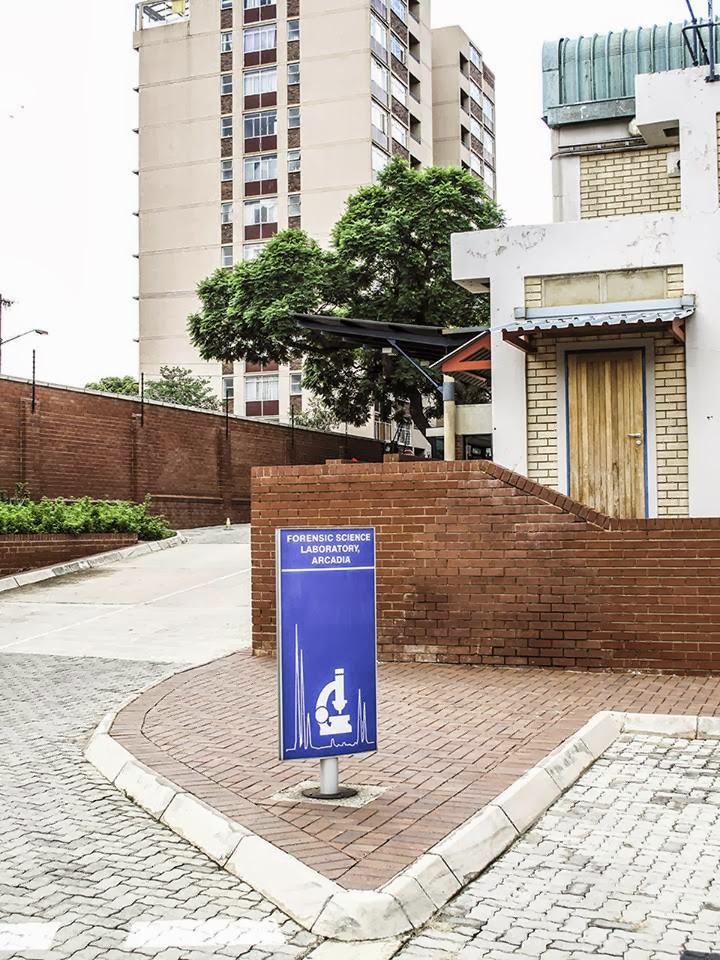 South Africa is a beautiful country and I'm very happy and thankful at the opportunity to come here and assist the SAPS. Now, if only airline seats were more spacious. :)
Posted by Jim Hoerricks, PhD at 5:00 AM No comments: