In case you weren't paying attention to the news over the last few days ... 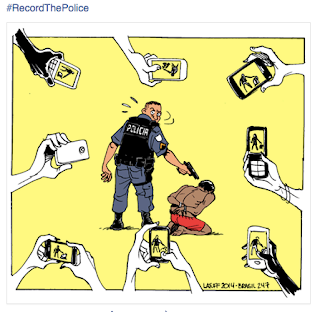 The news media is pushing this meme - #RecordThePolice.

If your agency hasn't seen it yet, it will. Citizen submitted video and images of police activity can help investigations ... and they can harm investigations if they've been edited to change the context of the scene. Recently, many videos surfaced showing an officer fully mounted on a male suspect trying to establish control. What was redacted by much of what the media was showing was the suspect initially attacking the officer. Context is everything. While citizens have the right to witness events from a safe distance and record the events on their mobile devices, they don't have the right to misrepresent events through contextual editing. In many jurisdictions, making a false statement to authorities is not prosecuted. Submitting altered DME is the same as making a false statement, and should be handled accordingly.

As I always say, when you're on the job, assume at least 10 cameras are recording you at all times. These days, that number is probably low.

Make sure you have a contextually accurate image or video. Authenticity is key in using DME in investigations. Remember, the average American does not know the correct answer to this question - how many people were in Rodney King's car when he was stopped?
Posted by Jim Hoerricks at 4:00 AM