Riverside, Ca., police have released a photo of the man suspected of fatally shooting an officer. 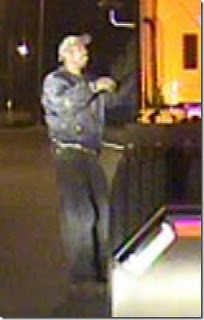 Officer Ryan Bonaminio, 27, was killed Sunday night by an unidentified man who was driving a stolen big-rig cab who was believed to be involved in an earlier hit-and-run accident.

The gunman, who remains at large, is described as a black male in his mid-30s to 40s, 6-1 or 6-2, with a slender build and possible facial hair, wearing dark clothing and a light-colored baseball cap.

He is armed with a handgun, police said.

“We’re putting out the photo in hopes that somebody would see the suspect and do the right thing,” said Police Chief Sergio Diaz.

The incident began when police received a call about a hit-and-run accident at the 60 Freeway and Market Street about 9:45 p.m., Brennan said.

Bonaminio was on routine patrol when he tried to stop the truck to question the driver about the incident, police said.

The trucker failed to stop despite the patrol car's flashing lights and siren, police said. The trucker eventually pulled over in front of nearby Fairmount Park. He got out of the vehicle and ran, with Bonaminio running after him, police said.

When other officers arrived at the scene, they found Bonaminio on the ground with a gunshot injury, police said. He was taken to Riverside Hospital, where he died of his injuries.

The photo of the man was taken by a video camera inside the officer’s car, said Riverside Police Chief Sergio Diaz. The picture was taken after the man shot the officer and as he was getting back into the cab to return the vehicle to the rental yard where it was stolen, Diaz said.

Posted by Jim Hoerricks at 6:02 AM

Awesome post! gr8 work my friend! thanks for sharing..