Photoshop as an amazing verb

“If a person in an image looks so pristine they look unreal, 90 percent of the time it is unreal,” she continued. “Photoshop is an amazing tool and I love it (otherwise I wouldn’t have spent years learning it), but I wanted to point out that it can be — and is — often abused.” - Anna Hill.

This just in from theblaze.com, "When you flip open a magazine or watch an ad on primetime TV, how much of the makeup or fashion model you’re seeing is real, and how much has been digitally enhanced?

Anna Hill, who’s been using Photoshop since she was in her teens, is highly aware of how much we’re shown that’s been faked using technology, as demonstrated in a recent viral video that showed such a transformation in progress.

“Many are edited so much, they may as well be advertising Photoshop rather than what they sell,” the 24-year-old student told TheBlaze in an email.

For her final advanced digital photography class project at East Carolina University, Hill “thought it would be fun to make fun of how much beauty ads are digitally enhanced.” 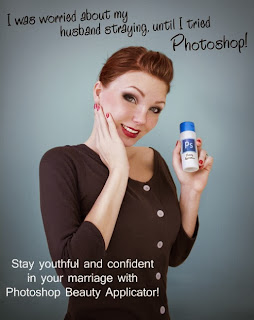 Whilst the work and the commentary have more to do with beauty and the media, it's illustrative to know just how much Photoshop can alter your reality.

Is it a good or bad thing? It depends. Check out Anna Hill's work here and see for yourself.
Posted by Jim Hoerricks at 1:52 PM